If you are creating a stop motion animation with ‘off the shelf’ characters it can be quite difficult to give personality and expression to your ‘talent’. While it is possible to tweak a mouth here or eyebrow there with applications such as Photoshop, it is very time consuming and involves making major changes to the appearance of the product you may be promoting. A very simple way to give some personality to your characters is to get them to blink or wink. A simple blink may be a character’s response to another character or an event but it does make it look like the character is awake and reacting to its environment. This also doesn’t significantly change the appearance of the character.

I normally place all of the frames in order onto the timeline in Adobe Premiere and do most of the editing. When we are happy with the rough edit I clean up the shots in one by one. Global edits such as dust removal will all ready have been done in Adobe Lightroom when I first import the images so this stage doesn’t need to be too labour intensive.  Premiere lets you transfer still frames from your timeline into Photoshop. These frames can then be edited.  When saved the edited version replaces the original frame in the timeline. 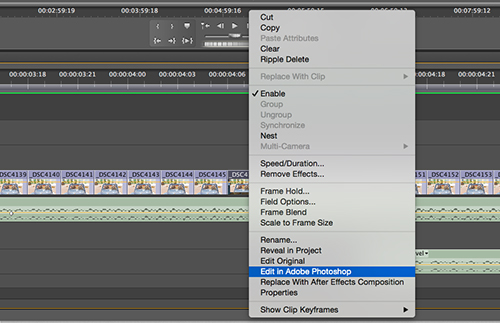 I normally use between 3 and 6 frames for a blink in stop motion animation. This varies with the frame rate of the video I am creating. For 10 FPS I use around 3 frames, for 25 FPS I use 6.

individual frames making up a blink

I use the Clone Stamp, the Heal Brush is a bit too perfect and can blend in the skin or fur so well that it removes any trace of an eye. The Clone Stamp leaves is a bit more patchy, this can look like there is an eyeball beneath the cloned eyelid. I also leave a bit of the eye at the bottom of the ‘socket’ in the frame for the fully closed eye (above image on right). This looks like eye lashes. I normally have a couple of frames to allow the eye to re-open.

Obviously a cheeky wink is done in the same way.

The above clip is from a recent stop-motion showreel